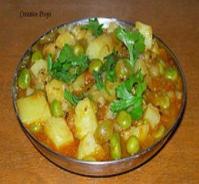 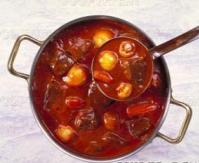 Indian cuisine is very diverse and a result of India's diverse population. Over the centuries,each new wave of settlers brought with them their own culinary practices which, with time,blended into the Indian cuisine as it is known today.  Beside settlers from out side, Indian cuisine has been influenced by environmental,social,religious,and political factor from within.

Mostly Indian cuisines are related by significant usage of spices, and by the use of large variety of vegetables and daals than other culinary traditions. In addition,a balanced Indian diet is considered one of the healthiest in the world. Within these recognizable similarities,there is an enormous variety of local
styles. Typically, North Indian meals consist of Chapatis or Rotis and rice as staple, eaten with a wide variety of side dishes  like daals, curries, Yogurt, chutney, and achaars.
South Indian dishes are mostly rice-based, sambhar, rasam and curries being important side dishes. Coconut is an important ingredient in most South Indian dishes.
Besides the main dishes, various snacks are widely popular in Indian cuisine,
such as Samosa and Pakaura. Among drinks, Tea enjoys heavy popularity, while coffee is mostly popular in South India. Nimboo Pani, Lassi, while in India also has many indigenous alcohlic beverages like Indian beer.
Search Tags: local, reno, sparks, washoe, nevada, eat, indian, food,